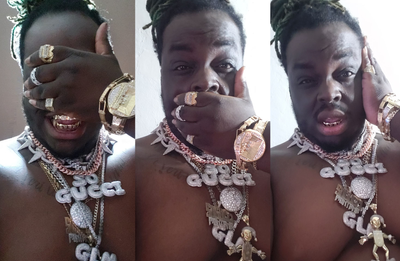 So'Gucci Montana Biography
So'Gucci Montana (Raymond Brown III) Born in South Carolina, June 16th 1986. From Cayce, he was raised with 5 brothers, & 5 sisters. Parents names, the late Raymond Brown Jr. & Mother(s) Charleen Brown & Sokino Brown.
With a church background he has been into music at an early age. From singing on the sunbeam choirs, to learning how to play the piano by ear at 13. His first song played by ear was Beethoven's Fur Elise. After his father passed in April of 2002, he & his family moved to Northeast Columbia, SC where he attended Richland Northeast High School where he joined 'Tbe Richland Northeast Gospel & Praise Choir ' also know as The GAP Choir.  From there is interest in becoming a Hip Hop Emcee would blossom.
Joining in different ciphers along side his brother Jeremy 'Sucka Free Krook ' Williams & long time friend Deontre Cannon 'Yung Dubble Dee ' would sow a seed which would soon inspire the Artist Known as So'Gucci Montana.
In 2006 So'Gucci Montana adopted a phrase, where he'd tell the hustlers & trappers in the area they'd need to, get like him, or in other words 'Get Like Me.' in 2011, He met his cousin Dapree Johnson & they would team up & collab with some of the hottest artist in their area Johnathan Francis. Santana Brown, Shanae Minced, his brother Jeremy Williams & they were called  the, 'Get Money Gangstarz ' from there, GLMGMG MUZIK ENTERTAINMENT was born.